In general I do the cooking in our house. If I ask my husband to make dinner he is likely to respond with a blank stare and some fumbling words. He is very good at many household tasks (including laundry) but for the most part, the kitchen has become my domain. Mike steers clear of the majority of its contents and happily takes the family out to eat when I am in need of a break.

Imagine my surprise when one evening Mike excitedly declared he found a recipe he wanted to make - by himself!

This was spring of 2011. Earlier that day Mike had been catching up on one of his favorite blogs written by Wil Wheaton, former child actor known for his role on Star Trek the Next Generation. Now Mr. Wheaton (Wil) is an internet celebrity giving a voice to geeks, gamers, while spreading his motto, "don't be a dick!"(aka be kind).  So, in March of 2011, Wil wrote about the joy of cooking and consuming a simple black bean soup. He went into his kitchen and tossed a bunch of things in a pan ("wang it" in his words). The resulting meal was, "an absolutely delightful bowl of soup."

Mike was inspired. He thought, if Wil Wheaton can make a delightful bowl of soup, so can I! A few days later Mike came home with a few bags of groceries and I took a turn steering clear of the kitchen.

He called me in a few times to answer a question but I was quickly shooed back out. His focus was admirable, but his progress was slow. Eventually I was called in to the kitchen, where the table was set, and dinner was served. Thank goodness. At that point I was beyond hungry.

There wasn't much to the meal, just the bowl of soup and maybe some tortilla chips on the side. A great soup doesn't need a lot of accessories.

I really like cooking but when you are in charge of planning, acquiring, and preparing every meal it becomes a little tiresome. I really appreciated Mike taking the initiative to plan and execute our simple soup supper.

I was full of warm fuzzy, and hungry, thoughts when Mike picked up his spoon and took the first bite. He leaned in for a slow slurp from his spoon. Then, he closed his eyes, sat back in his chair, and heaved a deep contented sigh. "Man, there really is nothing like sitting down to a meal that you have made yourself."

If wives were equipped with laser beams in their eyeballs my husband would have become a smoldering pile of ill timed comment.

Fortunately for him, the meal was darn good. We both enjoy a good spicy soup and this one delivered. We each had to go for the tissues before our bowls were empty.

By the end of the meal we were laughing about the difference in our perspectives. We agreed Wil Wheaton's soup was a dinner we would like to have again - one Mike volunteered to prepare. 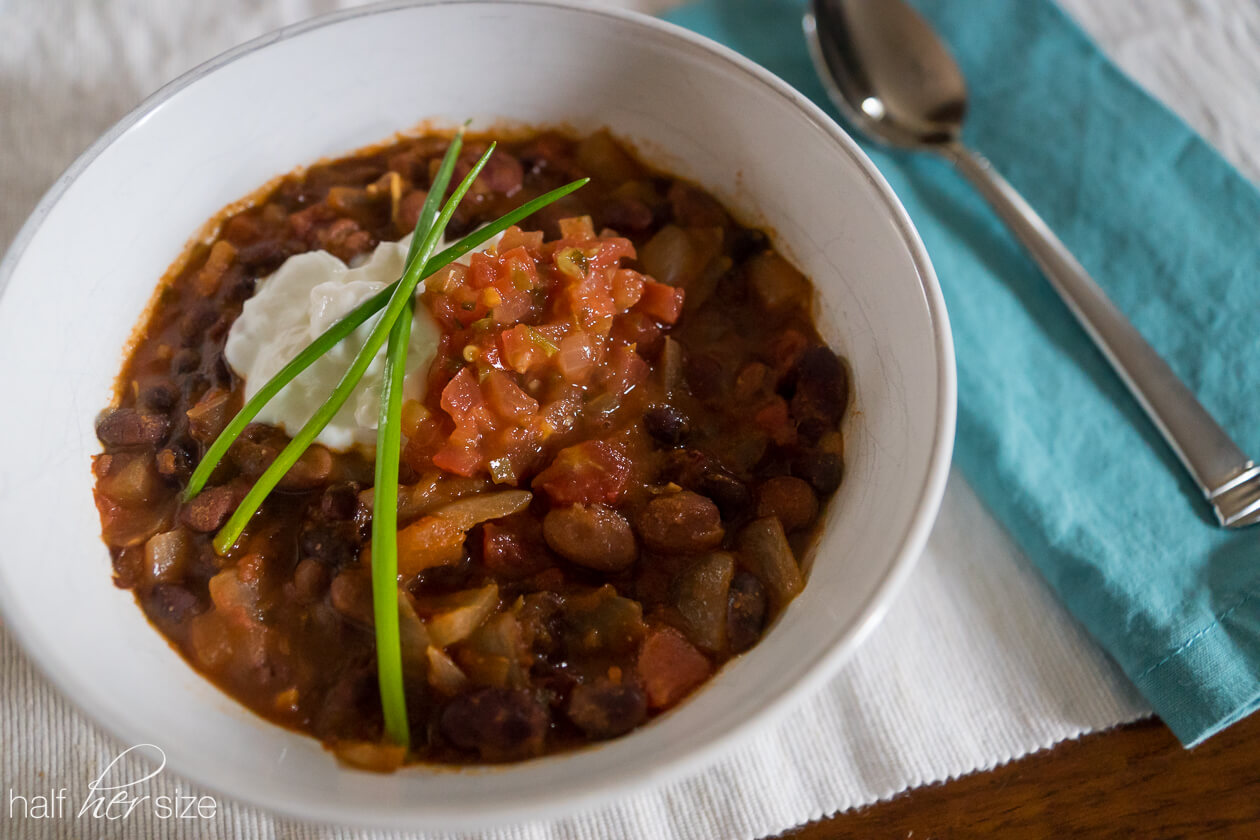 A few weeks ago I came across the printed blog post in a pile of papers. A few days prior Mike had been talked out of ordering 4 stars at a new teriyaki restaurant. When the meal arrived he harrumphed that he would have preferred more spice than the 3 stars delivered. I remembered the rich heat in this soup and later that week I surprised him with Wil Wheaton's, "Soup. Black Bean. Hot."

Turns out, this is actually a very quick soup recipe. I prepared it in a small dutch oven. After it simmered for a few minutes I slid the soup pot into the main oven I had just finished using (heat off) while we ran an after work errand. It was great to come home to a piping hot bowl of soup. Dinner was a delicious trip down memory lane. And, I didn't mind doing the cooking one bit because it meant Mike did the dishes. 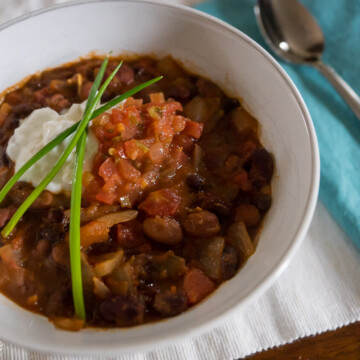 Rose McAvoy
Who says soup needs to be a slow food? This recipe delivers a punch of spice and heat with relatively little cooking time. You can double it as needed to feed a crowd or freeze a batch for even faster meals in the future. Adapted from "Soup. Black Bean. Hot." by Wil Wheaton
5 from 1 vote
Print Recipe Pin Recipe
Prep Time 10 mins
Cook Time 30 mins
Total Time 40 mins
Course Entree
Cuisine Southwestern
Servings 4
Calories 277 kcal

Control the heat in this soup by adding more or less of the chili + adobo sauce.
You may use a variety of beans for this soup, either canned or pre-cooked from dry. The total amount of beans should equal 2 ¾ cups.
If the soup is too thick add additional water in ¼ cup increments until it reaches your preferred consistency. 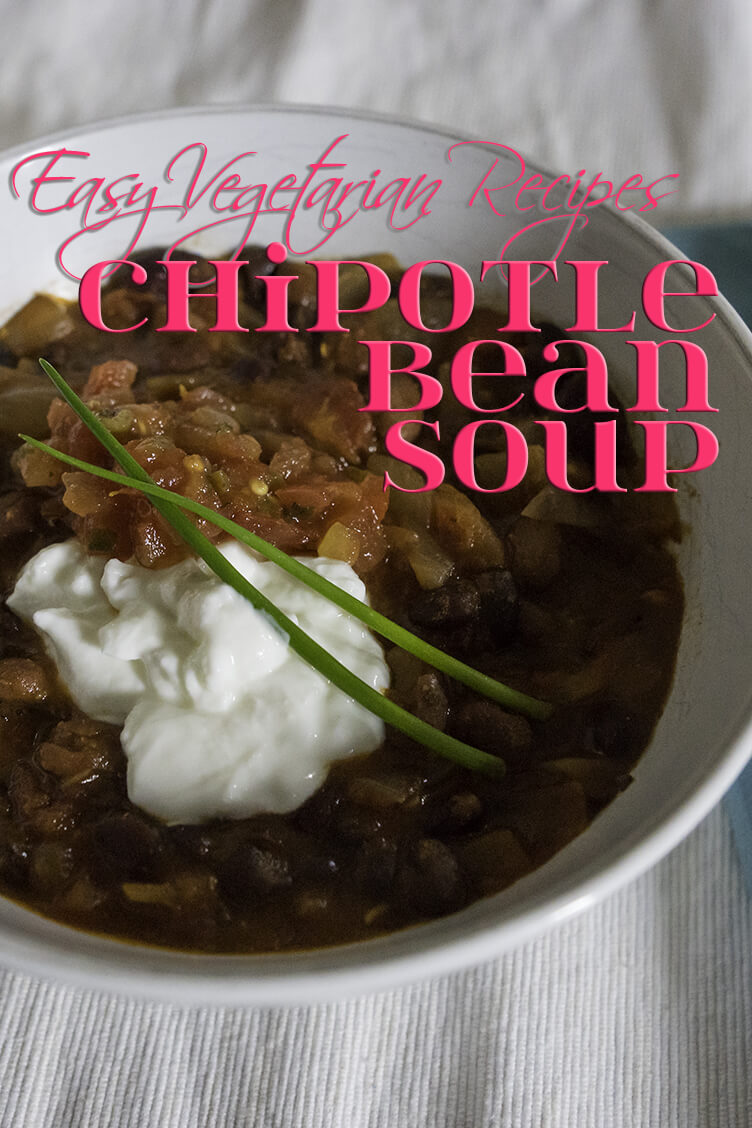