Banana bread pancakes are just slightly more work to make from scratch than adding mashed bananas and nuts to pre-made pancake mix (something I make no apologies for doing regularly). Making your pancakes from scratch allows you to adjust the ingredients to suit your family's tastes and sneak in some extra nutrition, in this case whole wheat flour and extra bran for fiber.

Mr. Second Helpings and I graduated The Little Helping from a crib to a Big Boy Bed. The Little Helping was very excited but slept as normal until night number three. That night our house became an episode of Super Nanny with Little Helping springing from his bed as fast as we could get him in it. He cried and negotiated telling us that it was his, "job" to play. He finally settled just before 11 o' clock and as I climbed into bed I predicted grumpily that he would probably be up at 5:30. Guess what? Promptly at 5:30 he appeared at my bedside and inquired, "are you sleeping Mommy?"

Sleep deprivation has effected me in a number of ways over the past few years. Generally I am slow moving and grumpy after a night with less sleep than I would prefer. On this particular morning I found myself functioning with a supernatural amount of energy. Before I was really aware of my actions I was in the kitchen pulling out ingredients and brainstorming recipes.

I had most of a carton of buttermilk sitting in the fridge left over from making bread pudding. Buttermilk is not something I have around often and it was making me anxious. A batch of pancakes would be just the thing to give the lingering buttermilk a purpose. 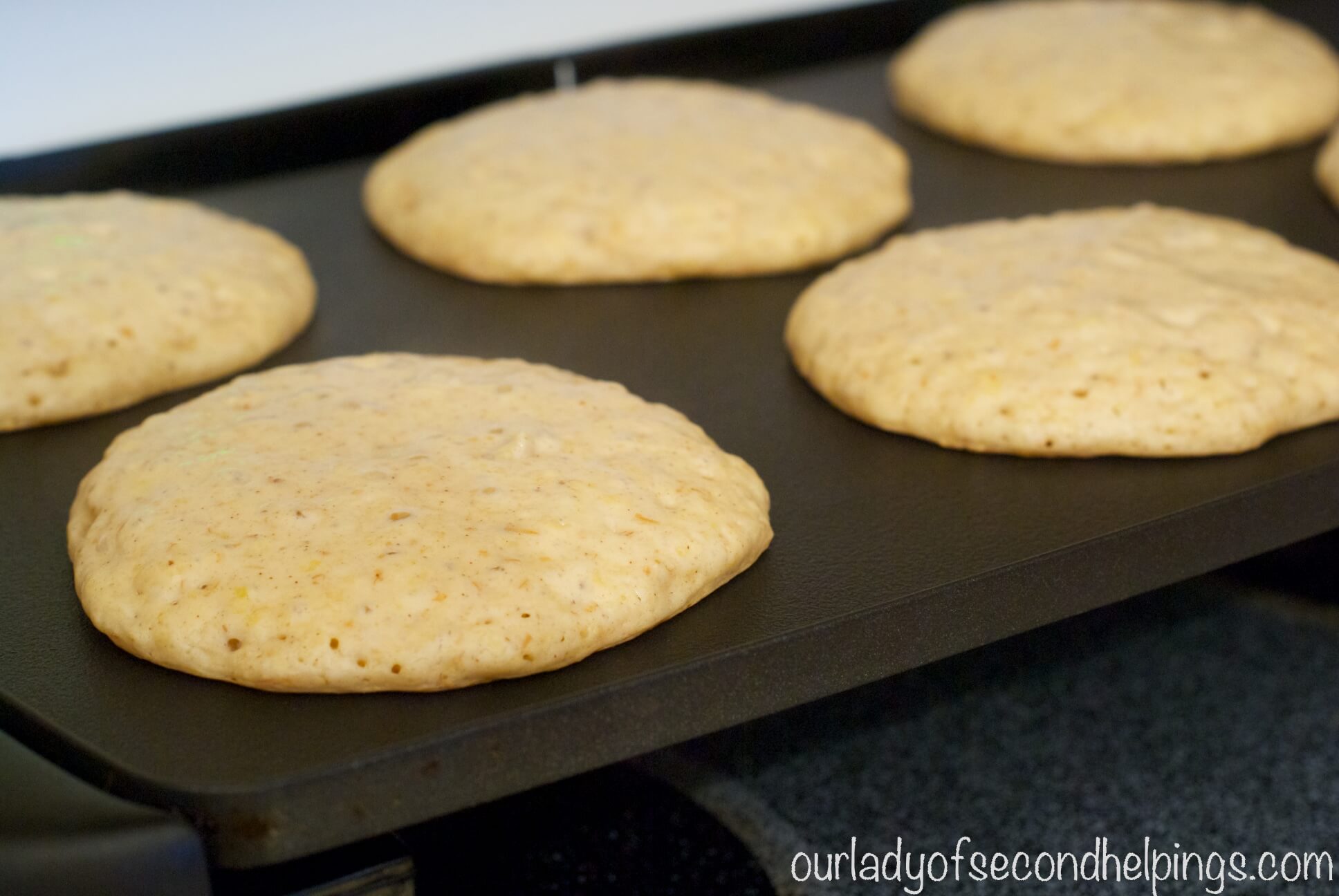 Simple fluffy pancakes are a delight but not very filling unless you eat half a dozen. I like a breakfast that is going to fuel me all the way to lunch so I looked for things to bulk up the pancakes. I pulled a bag of walnuts and some bran out of the freezer and mashed up a browning banana. As the grey light outside grew brighter I whipped up what shall henceforth be know as Banana Bread Pancakes.

We all chowed down in the early morning sunlight. I had four, for research purposes. They had a subtle but sweet banana flavor, an earthy note from the walnuts, hearty and filling from the whole wheat and extra bran, but with a nice fluffiness just like a good buttermilk pancake. Not too shabby for sleep deprived and barely caffeinated. I shall celebrate the success with a nap!

If the pancakes are golden but seem soft in the middle, let them rest in a low oven for a few more minutes.

Serving: 3gCalories: 238kcalCarbohydrates: 40gProtein: 9gFat: 5.8gCholesterol: 6mg
Tried this recipe?Let us know how it was!

*No buttermilk? No problem! Check out this post on The GoodLife Eats for simple ways to replicate buttermilk at home.